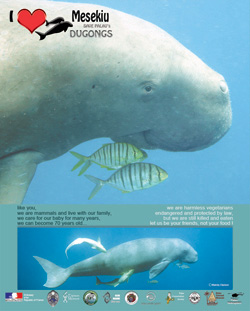 Neco Marine is also a partner for the PALAU DUGONG AWARENESS CAMPAIGN, which is coordinated by Mandy Etpison and supported by local NGOs, the Bureau of Marine Resources, Koror State, and Fish and Wildlife. The shy dugong sea cow is Palau's most endangered marine mammal, and little is known about it. Palau has the smallest and most isolated dugong population in the world, with possibly less than 200 animals. Palauans still hunt and eat dugongs, and hunting remains a problem in spite of local laws protecting the dugong. The awareness campaign aims to educate Palauans about the dugong, survey their feeding grounds and daily routes, and work with local government agencies to improve enforcement on illegal poaching. So far the campaign has distributed educational materials like stickers, folders and posters to local schools, tour operators and government agencies, aired dugong awareness messages on local TV and news, and started the surveys by boat and helicopter, which will continue over the next year. A 12 feet life-sized wooden statue of a dugong mother with two calves made by the Etpison Museum was presented to the Minister of State for display in August 2010. The President of Palau named the statue, the mother "Tarkid" (part of us) and the calves "Mesekemam" (look out for us).

A 45-page free dugong educational booklet was distributed to all local schools, libraries, and government agencies in January 2011. The Palau awareness campaign has now evolved into a regional campaign supported by SPREP and UNEP/CMS with other pacific range countries such as PNG, New Caledonia, Vanuatu, Australia, and the Solomon Islands. The regional launch was held in Palau on March 14, 2011.

Below is a short documentary that aired on CNN in August 2011 about the dugongs of Palau.

The dugong (Dugong dugon) is a large, herbivorous, marine mammal which spans the waters of at least 37 countries throughout the Indo-Pacific. The word "dugong" derives from the Malay duyung, both meaning "lady of the sea."

The dugong has a fusiform body with no dorsal fin or hind limbs, instead possessing paddle-like forelimbs and a fluked tail which provides locomotion through vertical movement. An average adult reaches a length of 2.7 metres (8.9 ft) and weight of 150 to 300 kilograms (330 to 660 lb). The largest known dugong was a female landed off the Saurashtra coast of west India, measuring 4.03 metres (13.2 ft) and weighing 1,018 kilograms (2,240 lb).

The dugong is heavily dependent on seagrasses for subsistence and is thus restricted to the coastal habitats where they grow, with the largest dugong concentrations typically occurring in wide, shallow, protected areas such as bays, mangrove channels and the lee sides of large inshore islands. Its snout is sharply downturned, an adaptation for grazing and uprooting benthic seagrasses.

The dugong has been hunted for thousands of years for its meat and oil; its current distribution is reduced and disjunct, and many populations are close to extinction. Despite being legally protected in many countries throughout their range, the main causes of population decline remain anthropogenic and include hunting, habitat degradation, and fishing-related fatalities. With its long lifespan of 70 years or more, and slow rate of reproduction, the dugong is especially vulnerable to these types of exploitation.