The Etpison Museum , with sponsorship from NECO Marine and PPR, assistance of visiting divers and local dive guides, has been building a database to collect information on Palau's individual mantas and how many are visiting Palau's reefs every year. previous newsletters (so far, over 250 manta rays have been photo ID'd here since 2010!!)

Here are  the latest additions since October 2013:  14 males + 2 females that have been seen around Lighthouse, Ulong, German Channel and Babelomekang areas.

M109 Ranger was seen during a fieldtrip hosted by NECO Marine for the Koror State Rangers to do a site management and mooring buoy evaluation of the German Channel site.

F129 Madrei was the first pregnant female seen this season in January, 2014, and was being chased by 9 males. Mantas often mate just after giving birth, and "courtship trains" of several males chasing a female are often seen between December and February in Palau. The female eventually will chose one male, and he will shadow her every move until they mate.

If you think you may have a photo of a manta not already featured in our database or these latest pages, pls submit your photo, and if it is a new one, you can name your manta. Have a look at the current database. 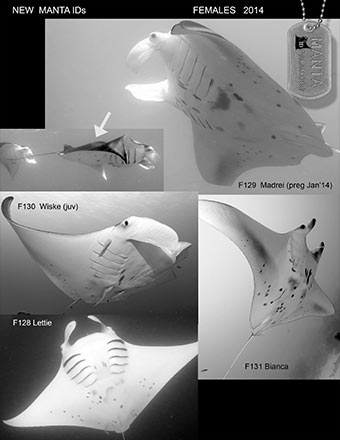 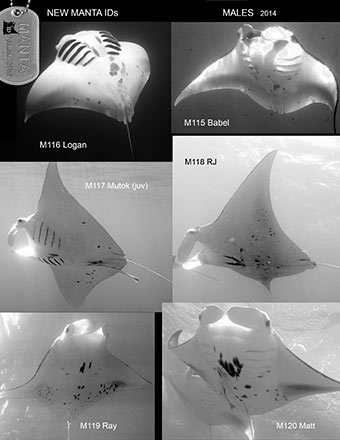 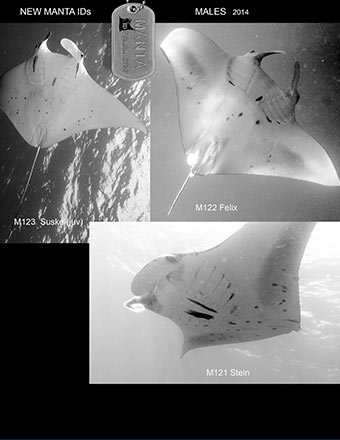