Behind the Scenes with the Churaumi Aquarium Mantas by Mandy Etpison

My Okinawa visit was hosted by the Palau Pacific Resort, who have been a sponsor of our Palau manta ID project, and Mr. Shirou Wakui, a well-known Japanese TV personality and environmentalist who has been involved with the design of the Churaumi Aquarium. I had heard that they have been able to breed manta rays in captivity, but there is little information available about it online, so I jumped at the chance to go and see for myself. I was interested in finding out if the ID pattern of the pups has any connection to the mother or father mantas. We see newborn pups every season in Palau, but do not know from which mother they come, so I was hoping to get some clues from the patterns. 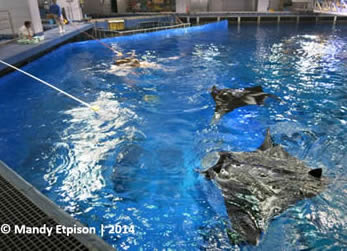 The ten year old 4-story reinforced concrete building with 77 tanks is very impressive, with ocean view all around, while we were walking around we saw humpback whales passing right by the shore. The main attraction is the huge Kuroshio (Black current) Sea tank (7,500m3, 10m deep by 35m x27m). At the moment it houses 3 whale sharks and 4 reef mantas. There are also nurse, leopard and guitar sharks, eagle and cow rays, one mobula, different species of tuna, Giant trevally, Mahi mahi, and other fish in this same tank. They used to have reef shark species and even bull sharks in the same tank, but had to remove those because they attacked the rays.

We were met by Mr. Miyahara, the Director General of the aquarium, who took us behind the scenes to see the complicated set-up required to keep the aquarium running (they pump seawater from 300m off shore, at a depth of 20m at 3,000m3 per hr.). Then we were off to talk to the trainers and see the feeding of the whale sharks and manta rays. Above the enormous tank, trainers feed the fish from metal walkways. I have seen whale sharks being fed in the wild by local fishermen in West Papua and the Philippines, and this was very similar. The trainers slapped their pole cups on the water to get the shark’s attention, and the sharks stand on their tail to gobble up the mix of minced fish, shrimp and vitamins. The mantas were fed in the same way in a separate corner to avoid a wrestling match with the whale sharks, and large chunks of fish were thrown in the water in another corner for the rest of the tank occupants. The manta feed consists only of frozen shrimp and minced fish mixed with vitamins.

The Churaumi aquarium has kept manta rays in captivity since 1988. I talked with veterinarian Keiichi Ueda, who has been taking care of these mantas for the last 4 years. During those 4 years they added 6 wild captured adult mantas. It takes them 2-4 weeks to get wild captured mantas trained to take food in captivity. 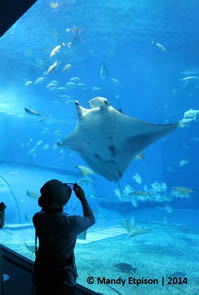 Their first birth was in June 2007, but the female pup died after 6 days, from injuriesinflicted by the adult male manta. The first successful birth was in June, 2008, and the male pup survived. Since the first incident they keep the newborn mantas in an open ocean pen for a year and hand feed them before introducing them back into the tank. Their conclusions so far are that female mantas have a single pup, gestation period is almost exactly one year, and females can give birth every year. Copulation can last from 11-90 seconds. In 2008, they made an underwater housing for their ultrasound machine, and used it on a wild captured pregnant manta. They found out that the manta embryo, which does not have a direct connection to the mother, takes in oxygen from uterine fluid through buccal-pumping, which changes to ram-ventilation after birth. (Live-bearing manta ray: how the embryo acquires oxygen without placenta and umbilical cord- Tomita et al, 2012).

This female pup was born six months later in June 2009 and was the second successful birth in captivity. Another female pup was born in June, 2010 from female #10 and male #6, the two longest surviving mantas in captivity (#10 since 1998, #6 since 1992). Female #10 was an adult manta when caught wild and is the only female who has given birth several times in captivity. She died in 2013 of unknown causes while pregnant again. They showed me video where they pulled out the almost full term pup after the female died. They were able to revive it and get it swimming, but unfortunately the pup also died three days later.

I was interested to find out if the behavior of the mantas in captivity showed any changes from those in the wild, but unfortunately none of the aquarium manta caretakers had ever swam or dived with manta rays in the wild, and no behavior studies are being done at the aquarium. I was at first very impressed with the facility, but became quite depressed when I learned that they are working with manta #22, and out of those 22 only 4 mantas survive today. They have also gone through a lot of whale sharks, since they are working with whale shark #32. They are now planning for a future humpback whale tank design…. Standing in front of the huge Kuroshio tank watching hundreds of visitors admiring the whale sharks and mantas, I am glad I came here to experience this, but I can’t help but feel that these long-lived pelagic beauties should be left to roam the ocean, and not be confined to a tank, no matter how well done, or how educational it is for non-divers to be able to watch these animals up close.